Propagating hashtags in a Galaxy history

We have written a utility to help you propagate tags through your histories. Did you forget to tag the inputs before running a long workflow? We’ve now solved this issue.

To process data using Galaxy, an raw dataset (HDA) is uploaded and few hashtags are added to make it better searchable and identifiable. Then, using different tools/workflows, this raw/input dataset is transformed into multiple new datasets. What if, after running dozens of tools, generating hundreds or thousands of datasets, you realise that you’ve forgotten to tag your input datasets? In this case, the new hashtags will not be propagated to the generated datasets automatically. We require an easy and automatic solution to assign correct hashtags to all of the downstream datasets generated from our inputs, whenever new hashtags are added to any of the datasets in our history. Before going into the further explanation, let’s assign the following labels to the types/names of datasets we would use:

This script will solve the situations mentioned above, adding any new hashtags to all derived datasets. The script is written considering a Galaxy history as a tree (data structure) with input datasets as its roots and all the generated ones either as nodes or leaves of this tree. An example history ‘tree’ is shown in the figure below. 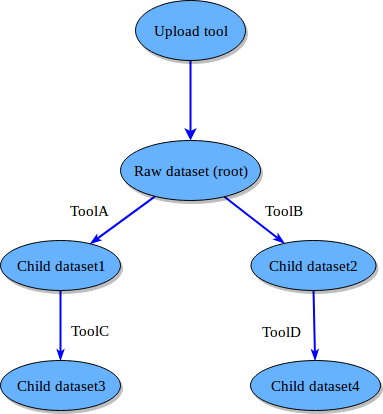 In the above figure, we can see one input dataset with multiple datasets created from this input, using different tools (Galaxy tools). There can be any number of levels (tree hierarchy) in the ‘history’ tree from the top to bottom.

How to use the script

In order to use the script to propagate hashtags from parents to children, a user should remember the hierarchy of their datasets. Wherever hashtags are added to datasets, they will be propagated to all the children of that dataset. These new hashtags will be appended to the already existing hashtags for each child dataset. To use this script:

Propagate hashtags in a specific history

Propagate hashtags in your most recently updated history 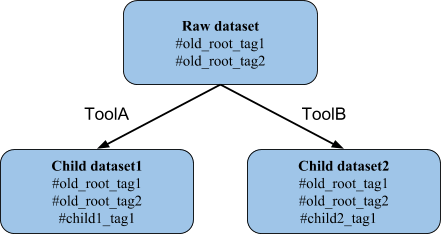 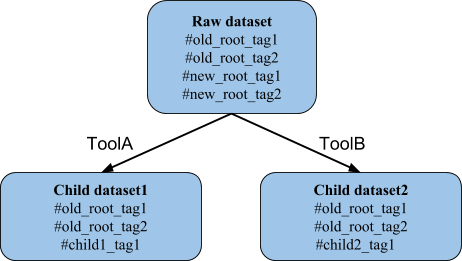 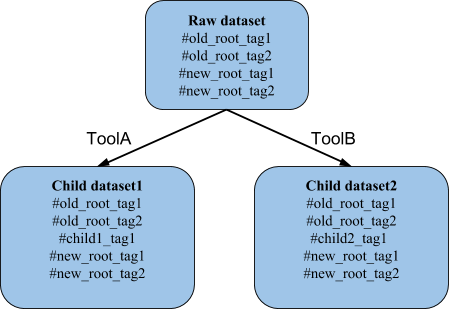 In the previous example, we saw a tree with one level of hierarchy. In the following visual, we would see a more complex example of inheriting hashtags from parents involving multiple levels in the history tree.(figure below). 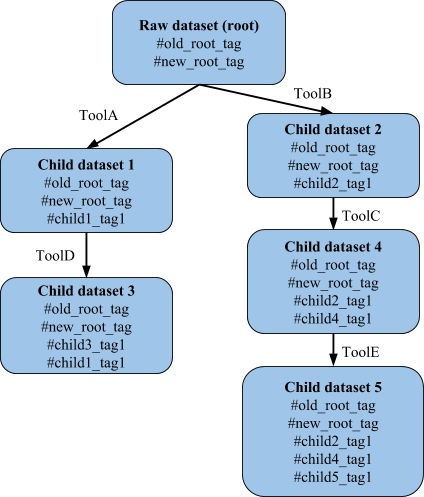 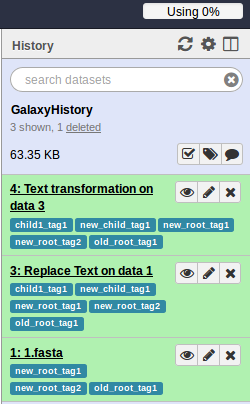 In the above figure, “1.fasta” is the root (input dataset). “3:Replace Text on data 1” is the child/derived dataset from the root. “4: Text transformation on data 3” is the child of the second dataset. The hashtags that we see are after executing the script on this history.