By Magnus Ø. Arntzen (Norwegian University of Life Sciences)
(This post is also available as a poster)

The meta-omics technologies have provided scientists with methods for addressing the complexity of microbial communities on a scale not attainable before. Individually, the different techniques can provide great insight; while in combination, they can provide a detailed understanding of which organisms occupy specific metabolic niches, how they interact, and how they utilize environmental nutrients.

In this post we will describe the adaption of a repertoire of commonly used omics tools spanning all three technologies (metagenomics, -transcriptomics and -proteomics) into the Galaxy framework, in order to generate a user-accessible, scalable and robust analytical pipeline for integrated meta-omics analysis.

We have applied this pipeline to deconvolute a highly efficient cellulose-degrading minimal consortium isolated and enriched from a biogas reactor in Fredrikstad, Norway. Metagenomic analysis recovered metagenome-assembled genomes (MAGs) for several constituent populations including Hungateiclostridium thermocellum, Acetomicrobium mobile and multiple heterogenic strains affiliated to Coprothermobacter proteolyticus. Metatranscriptomic and metaproteomic analysis revealed co-expression of carbohydrate-active enzymes (CAZymes) from multiple populations, inferring deeper microbial interactions that are dedicated towards co-degradation of cellulose and hemicellulose. By combining meta-omics methods, we have been able to identify and describe key roles played by specific uncultured microorganisms in complex biomass degradation processes.

The sample studied in this work originated from a thermophilic biogas-plant operated on muncipal food waste and manure. After a round in a lab-scale reactor, we performed a serial dilution to extinction experiment to simplify and enrich the community for growth on cellulose (Norwegian Spruce).

An Illumnia HiSeq 3000 platform was used for metagenomics shotgun sequencing of the microbial community. Samples were sequenced with paired ends (2 x 125 bp) on four lanes. These were the steps of the metagenomics analysis workflow, numbered according to the figure below:

The metagenomics workflow is shared publicly and can be found here

Samples were taken at different timepoints during the lifetime of the microbial community, as indicated in the figure above. For this analysis, we used the time points 13h, 23h and 38h. mRNA extraction was performed in triplicate and was sequenced with paired-end technology (2 x 125 bp) on one lane of an Illumnia HiSeq 3000 system. These were the steps of the metatranscriptomics analysis workflow, numbered according to the figure below:

The metatranscriptomics workflow is shared publicly and can be found here

Samples for proteomics were taken for every timepoint as indicated in the dataset-figure above. For this analysis, we used the same time points as we used for metatranscriptomics, 13h, 23h and 38h. Each sample were separated into 16 fractions by SDS-PAGE, cut out and digested with trypsin before analyzed on a Q-Exactive (Thermo) mass spectrometer. These were the steps of the metaproteomics analysis workflow, numbered according to the figure below: 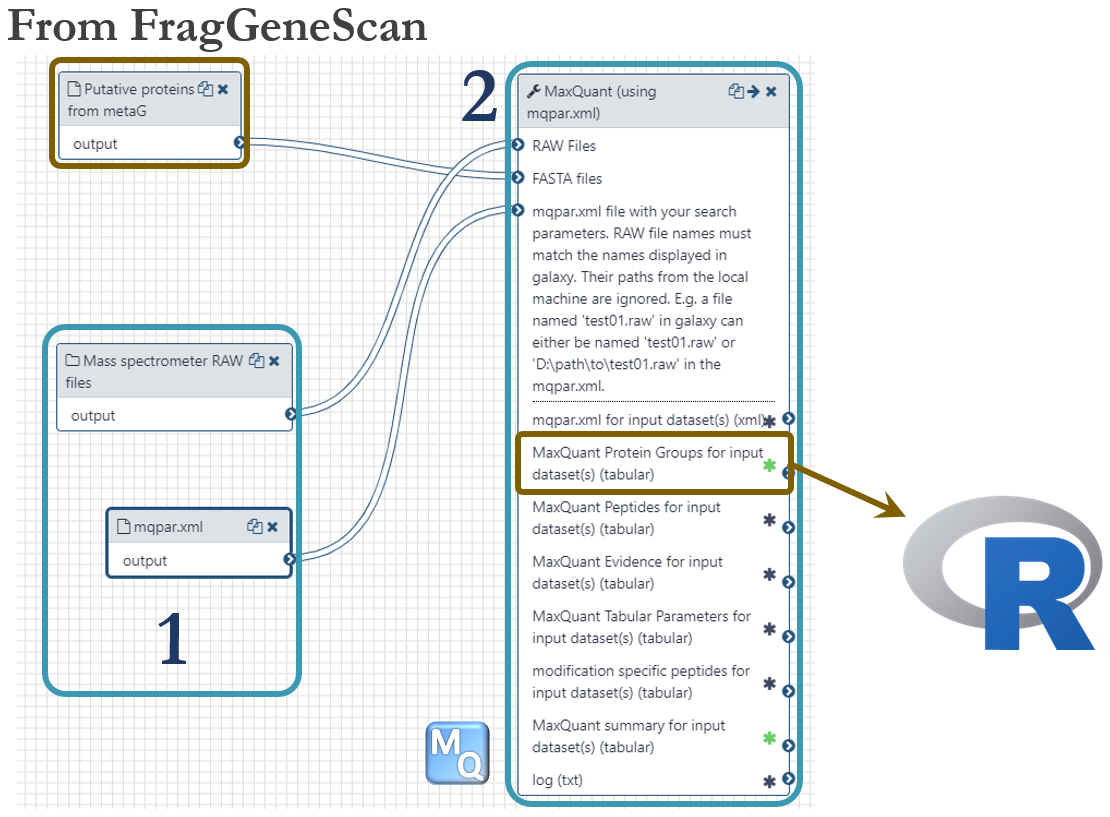 The metaproteomics workflow is shared publicly and can be found here

For the following, a stand-alone version of RStudio can be used, or one can utilize the live RStudio which has direct access to the data residing in the Galaxy History.

The files needed to generate the following plots are:

The first plot to consider is the phylogenetic binning of contigs. In our workflow the binning was accomplished using metagenomic reads and the assembled contigs from metaSPAdes. This produced two outputs of specific interest, an abundance file and a list of the bins. The latter is in FASTA format and one file per bin exist. Our script reads these files and generate a list of contigs with information about the contig abundance and which bin it belongs to. Then, we plot the contig’s GC% vs. abundance using ggplot in R and color it by bin. A metagenome-assembled genome (MAG), or bin, typically has a well-clustered layout in this plot, which can be highlighted with the geom_density2d function. 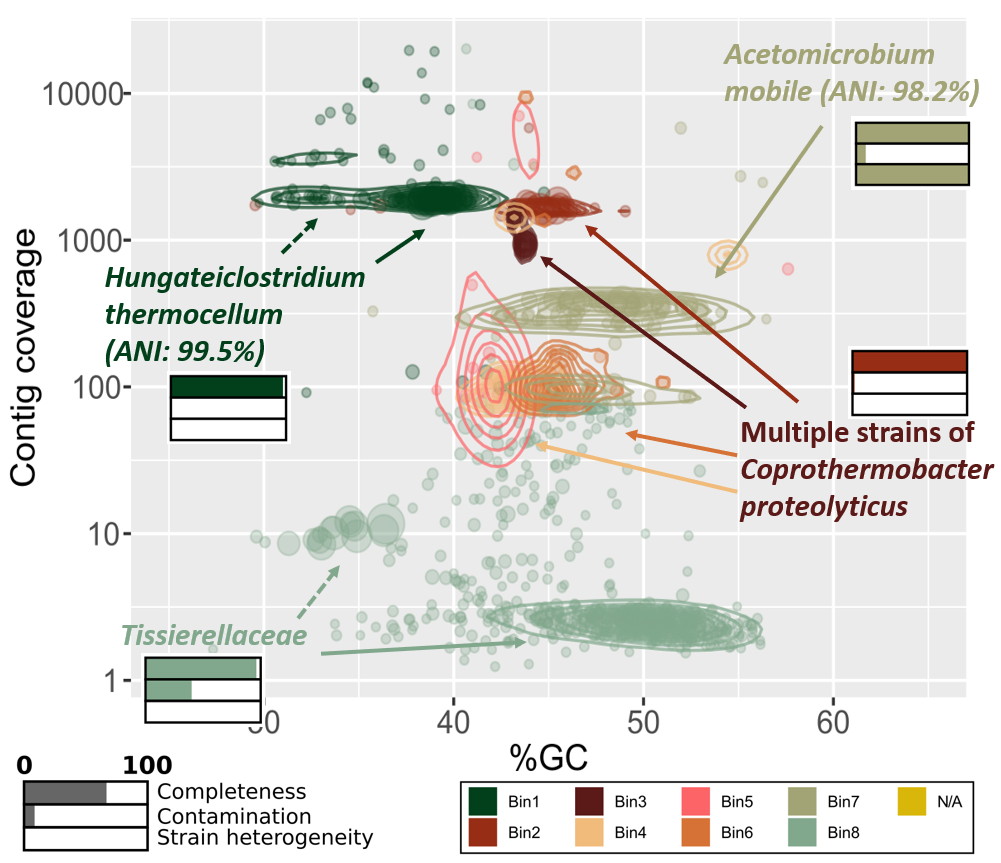 Taxonomic abundance plots can be calculated either from metaproteomics or metatranscriptomics data, using the summed abundances (not log2’ed!) of all mRNA/proteins per bin. Here we calculated the summed LFQ (label-free quantification) values reported by MaxQuant. The most abundant community member at all time points was Bin1, Hungateiclostridium thermocellum. 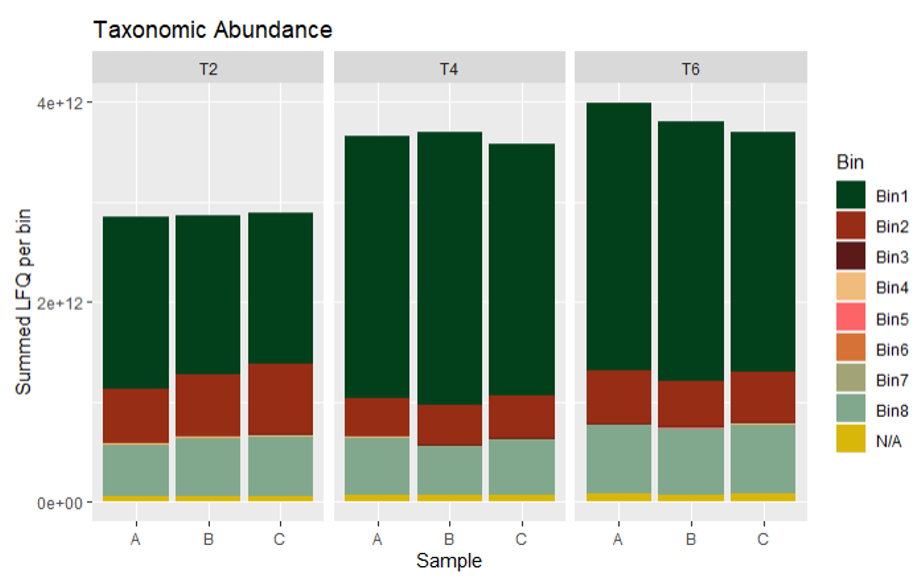 Further, we can generate an overview of all CAZymes in the microbial community. This can of course be made for any functional annotation, but here we are focussing on CAZymes. We use the annotation file from dbCAN and InterProScan and filter this for only CAZymes. Note that CAZymes are modular domains and enzymes can therefore harbour multiple CAZy domains; in our case this means that the CAZy column is semicolon-separated. In Tidyverse, there is a function to split multiple terms within one column into several rows, keeping all the other information, see separate_rows.

This overview plot suggests that Bin1 (Hungateiclostridium thermocellum) is the main polysaccharide hydrolyser, and further, that it utilizes cellulosomes, i.e. large enzyme complexes where many enzymes can degrade cellulose simulateously. The monomer, glucose, is used by the many suger fermenters present in the community.

For this dataset we have two ‘functional layers’, mRNA and protein. We can therefore calculate quantification of individual enzymes, or for enzyme classes, or even at pathway-level by utilizing e.g. the EC-annotation available within the InterProScan annotation file. For this example, we have focussed on two enzyme classes, glycoside hydrolases and glycosyl transferases; these are colored red and blue in the below figure, respectively.
For this we need the ProteinGroups.txt file from MaxQuant, and the combined quantification file from Kallisto. We use the ‘Majority protein IDs’ (up to first semicolon) as geneID for metaproteomics and ‘target_id’ as geneID for metatranscriptomics. In Tidyverse, we can join the two tables based on these common identifiers by using the function full_join. As quantitative values we use LFQ (label-free quantification) for proteomics and tpm (transcript per million) for transcriptomics. Both values need to be log2-transformed. Note that ggplot (and Tidyverse in general) does not work with tables with quantification values in different columns. We therefore need to ‘melt’ the table to generate a one-column value representation. This can be accomplished using the pivot_longer function. Then finally, to visualize the trends in quantification over time, we apply a z-score normalization per protein/transcript, independently for each omics.

Note that the trends in quantification at enzyme-class level is by and large similar; however, for some classes there are differences. This can be linked to the half-life of molecules, which is just a few minutes for mRNA while up to hours for proteins.

The last plot cannot be generated using a R-script, unfortunately, but rather require your ulitmate Illustrator/Inkscape skills. This is a plot of the inferred carbon flow within the microbial community, based on the plots and data above. The metagenomics provided us with MAGs present in our community, and the functional annotaion allowed us to predict what each of them were capable of doing. Metatranscriptomics and metaproteomics provided us with information about what they were actually doing, and who was doing what. Additional community metadata, such as gas analysis, reveiled that the final product was methane. We can then draw a graph of anaerobic degradation, starting with cellulose being converted in glucose, that is converted further to acetate. A syntrophic acetate oxidizing bacterium and a methanogetn (both not identified in this proof-of-principle Galaxy implementation, but in the full dataset) converts acetate further to formate, CO2, H2 and methane.

Here we have drawn the relevant pathways and decorated them with metaproteomics LFQ-values (from the full dataset). This suggests that cellulose is primarily degraded by Hungateiclostridium thermocellum while the cellulose monomer, glucose, is fermented to acetate by Coprothermobacter proteolyticus, Acetomicrobium mobile and Tissierellaceae. 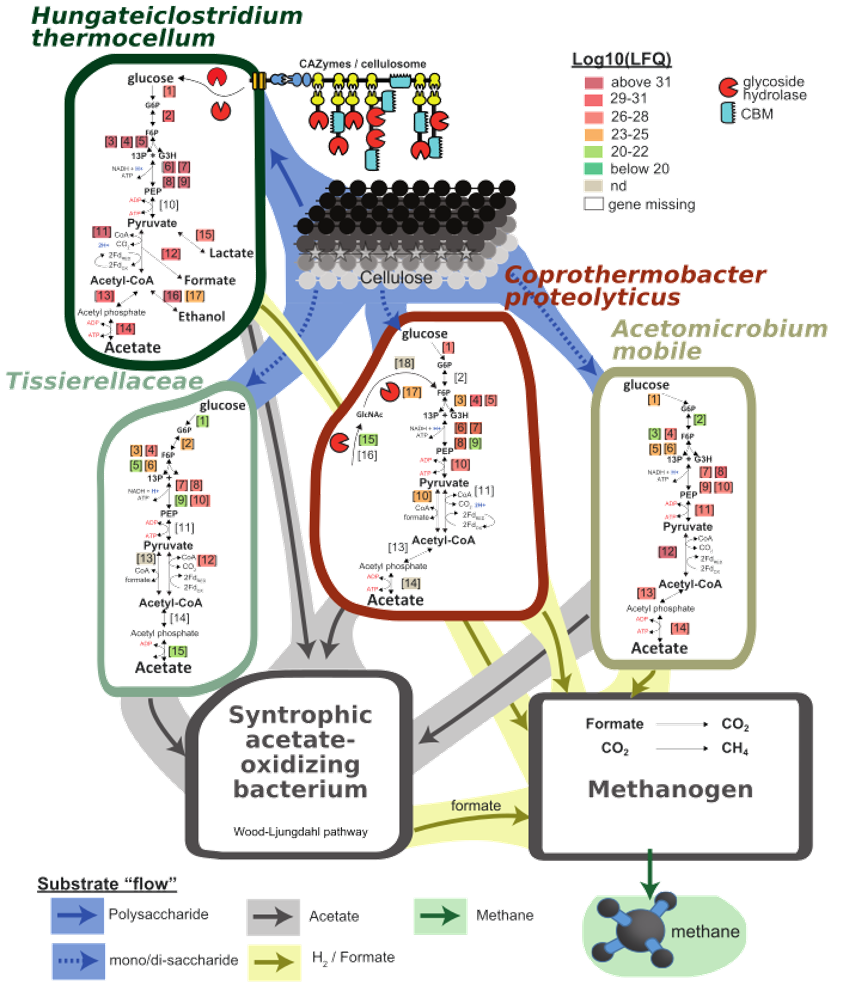 This work was funded by the Norwegian Centennial Chair Programme.

This study has been described in its entirey here: